As a co-operative we believe in family working together for a long-term sustainable business to pass on to our children, and their grandchildren. And to bring a world-leading infant formula to families just like ours around the world.

We are a co-operative, owned by the farmers who supply goat milk. Co-operative is also a word we use to describe our business style, which is built around sustainable and long-term relationships with our partners.

Since early successes, our export markets have continued to grow and DGC’s formula products are now well established in around 30 countries around the globe.

Our farmers know how important a high quality diet is to goats. DGC goats thrive on locally grown, on-farm forages such as grasses, clover, lucerne, hay, silage or pasture plants.

DGC is of the land, because we are a co-operative of goat farmers who live and breathe by the rhythms of nature. From sun up to sundown, in all kinds of weather, we are caring for our goats.

There are over 200 people working at DGC, meet a few below Around 14 years ago my wife and I moved to New Zealand for its small population, clean green reputation and great environment to bring up children. I joined the Dairy Goat Co- operative initially as a Process Controller and more recently as Team Leader..

I love that DGC makes a big difference in people’s lives. I have first-hand experience in parenting unsettled babies and I know what a big improvement using DGC’s formulas can make to a child’s and parents well-being. This gives me a real sense of purpose in my role. As manager of DGC’s research programme into the nutritional and physiological benefits of goat milk formulations for infants and young children, my role is to share scientific and technical knowledge of our products with healthcare professionals, regulatory agencies and consumers.

I gained a BSC (hons) in Biochemistry at University of Western Australia and also completed a PhD in human lactation. I then worked at the National Institutes of Health in USA, the Institute of Animal Physiology and Genetics Research and University of Nottingham in UK before commencing work with AgResearch in New Zealand. Whilst at AgResearch I conducted some research work for DGC before joining the company. I have published over eighty five peer-reviewed science articles, thirty five of which are related to goat milk or goat milk products.

My role at DGC is to initiate and manage research on the nutritional and physiological benefits of goat milk formulations for infants and young children. It also involves lending training support to the DGC Asian markets and technical knowledge of our research and formulations to health care professionals and consumers.

I was born in New Zealand and completed a BSc(Hons) at Otago University before becoming a secondary school teacher followed by post-graduate study and a PhD in Immunology at the Australian National University, in Canberra, Australia. I then held post-doctoral positions in laboratories overseas, including Kenya and Scotland, working extensively in the field of immunology and vaccine development.

My life is science. I love it. Outside office hours I am a Trustee on both the Hamilton Science Excellence Awards Trust and the Exscite Trust and have been involved with the NIWA Waikato Science & Technology Fair for more than twelve years, holding the role of Chief Judge for six years. I also talk to groups about science and give presentations to groups in the Waikato region. I am very proud to have received the Hamilton Science Kudos Award for Science Education/Communication and the NZ Association of Scientists Award for Science Communication. Having worked for 10 years in the Research and Development team on product formulations and development, my current role focuses on supporting the export of DGC of products around the world. The Market Access team looks after the registration of products in export markets and compliance with market regulations. The ever-evolving regulatory environment makes this role a fascinating challenge on a day to day basis.

What I love the most about DGC is the passion for the products and how people are valued, whether they are DGC shareholder farmers, staff members, marketing partners or consumers. It is a privilege and a great pleasure to be working for a successful NZ company within a multicultural environment.

As a French born citizen, I treasure the NZ lifestyle, work life balance and friendships I have developed while working at DGC. I love working in the DGC Quality team. It’s very rewarding to know that our customers are getting the best product we can make and that I was able to contribute to that.

As a scientist I like fact-finding and problem-solving. I work to maintain our compliance with regulations and standards, so we can be sure that we’re doing everything we need to in order to provide our customers the best product we can make.

It’s very rewarding to know that I was able to contribute to making a high-quality product. It’s great to be part of a whanau like DGC! We’re all part of a great team. Since starting at DGC’s Can Filling Plant in 2008, I have really enjoyed working in such a collaborative environment and being involved with the wider team.

We have a CEO who gets around to the shop floor and knows everybody on it. I like that.

When I’m not here you will find me skateboarding, tattooing, playing golf or with my wife and four beautiful children. I am a nutritionist with a special interest in the nutrition and well-being of infants and young children. I have been privileged in my time at DGC to combine this passion with my working life in the development, research and regulatory affairs of goats milk products.

I work with government agencies and other organisations to help shape new regulations as the environment for infant and follow-up formula products continue to become more complex. As a company we are constantly looking for sensible and practical solutions that raise standards and safe-guard consumers whilst allowing for the effective implementation of scientific advances.

At home my work becomes reality with my grandchildren reminding me of the practicalities of feeding infants and young children. I have been in the NZ dairy industry for over twenty years and at DGC for seventeen. I now oversee and co-ordinate the work carried out by DGC’s Product Development team and also help support the Manufacturing teams.

t’s incredibly rewarding being in a position to help the various teams find solutions to nutrition-related challenges that are beneficial to everyone involved. I love working with the team at DGC and working with product formulation.

When I’m not at work you’ll find me with my two teenage boys or in the garden. I love knowing that DGC provides such good infant formula for all our customers, be it New Zealand or overseas.

As a family oriented person, I enjoy sharing life with them and our friends. My wife and I are very proud of our two adult children and four grandchildren. I love it that DGC is a family company. Two of my grandsons help out here during the school holidays.

I feel very grateful to be part of a growing company that is committed to its vision and dedicated to the customer – the infants themselves. Everyone who works at DGC has an important role to play in this vision and is valued. I am proud to be part of it.

My role of checking and providing assurance that our products are eligible for their destined market/s, ensuring our systems are well maintained and up to speed to meet market standards is a respected part of that big picture. That feels good.

From personal experience, as a mother whose child experienced eczema when he came off breastmilk, I believe DGC’s Goat infant formula had a positive affect on our son. His skin irritation cleared up and our worries and concerns disappeared. I am thankful that this product is available for other mothers out there. I joined DGC five years ago as a chemistry graduate, eager to join the work force and a really green about quality systems and the complexities of production. But with the help and knowledge of the DGC family I quickly became immersed in the fast-paced, challenging atmosphere.

During my time in various areas of DGC’s Quality team my work has included product sampling, sensory evaluation of product, plant quality assurance support and now I look after some of the regulatory and compliance side of what we do.

The best thing about working here is the interaction with all the various departments and the many opportunities to learn and improve everyday. Because of the overseas time differences of our market partners, my day usually starts with processing overnight emails. Then it’s straight into processing export-ready shipments and compiling document sets for the shipments that have left previously.

As well as our all important market partners I also co-ordinate with the many groups throughout DGC, Customs, Ministry of Primary Industries and shipping companies. I get real satisfaction knowing that our product has been successfully shipped from NZ and has passed all the import-clearance processes and is on its way to our DGC babies.

Like many here at DGC I am a family person and out of work I spend my time with my partner Robbie and our blended family of nine. I like how DGC give young people opportunities. One our boys is the Engineering Support Technician here. Spray drying is the starting point at DGC and a key part of the supply chain. I see myself as a “middle man”. I work with multiple groups in the business to oversee and coordinate manufacturing requirements for the drying plants. The result of this is quality powder for our consumers.

What I love about my role is that I am able to liaise with the wider group and that my contribution helps to make a difference to so many lives around the world.

When I’m not at work I’m active, fishing, playing music, training at the gym or hiking with the wife and kids.

Formed in 1984, we have grown to now distribute to over 30 countries around the globe. We have enjoyed many challenges and milestones along the way.

Nannycare brand launched in the UK. 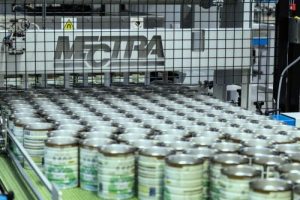